Academic policies, appeals, offences and codes of conduct can be confusing to navigate. That’s where your students’ union can assist. Thee UTMSU can guide you through the university’s policies and procedures and work to protect your rights as a student. When you want academic advice, need to appeal grades, are academic misconduct, or other issues with the University, the UTMSU is here to assist you through the process.

For more information please email academic@utmsu.ca to schedule an appointment (currently our in-office hours are closed due to the campus closure).

How long will it take for the university to contact me about my Academic Offence?

After your meeting with your prof, it may take anywhere from a week, to a month for the university to contact you regarding your case.

If I didn't know it was an academic offence can I still be found guilty?

Yes. Unfortunately, lack of knowledge of an offence is not a valid defence under The Code of Behaviour on Academic Measures.

Does it matter if it is my second academic offence?

Yes, the university will consider your past academic offences when deciding your penalty.

Will I get expelled?

You can only get expelled if you plead innocent and are found guilty at the third level Tribunal meeting.

Do I need a lawyer?

In 90% of cases no. You only need a lawyer if you are going to the third level tribunal meeting.

It was a mistake! Does that matter?

The university is typically very understanding when it comes to mistakes. However, that does not mean you won’t be penalized. Unfortunately, it does not matter if it was a mistake, if the offence is committed your professor is obligated to alert the Dean/ Academic Integrity Office.

Can I LWD a course if there is an ongoing academic integrity case?

If I do Credit / No Credit can I see my final grade?

You may request your final grade from your professor however they are not obligated to provide it to you and may decline.

Yes, you absolutely can.

What is the minimum GPA to not be on Academic Probation?

A CGPA of 1.5 or higher is needed to not be on probation.

Can I Credit or No Credit a course needed for my program?

How many times can you apply for a program to get into post?

There is no limit.

What is the difference between AGPA and CGPA?

Introducing our new campaign Know Your Academics! Every week we will be posting FAQs, Deadlines, Fun Facts and more to inform you about your rights and responsibilities in your academic studies. For questions please email vpua@utmsu.ca.

What’s the process when accused of an Academic Offence?

Step 1: Meeting with your Professor

When a professor or instructor believes you have committed an academic offence they will inform you via email or in-person meeting giving reasons why they believe an offence was committed and provide you with the opportunity to discuss. Nothing you say in this meeting can be used against you/ used as evidence.

This is a meeting with the Dean or Dean’s Designate. This meeting only occurs if your professor recommends it.

Step 3: Meeting with the Tribunal

This is a meeting with the Tribunal. This meeting only occurs in no decision can be reached by the Dean, or you enter a not-guilty plea.

The process for prosecuting an alleged academic offence begins with the laying of a charge by the Provost against the student. This is done when the student does not admit guilt; when the sanction desired is beyond the power of the dean to impose; when the student has been found guilty of a previous offence; or when the student is being accused simultaneously of two or more different offences involving more than one incident. Notice of the charge shall be in writing, addressed to the student, signed by or under the authority of the Provost and filed with the Secretary. It must contain a statement of what the student is charged with and contain sufficient evidence to allow the student to understand what and why they are being charged with said offence.

(i) hear and dispose of charges brought under the Code;

(ii) report its decisions for information to the Academic Board;

(iii) make recommendations to the Governing Council for punishment according to the code. 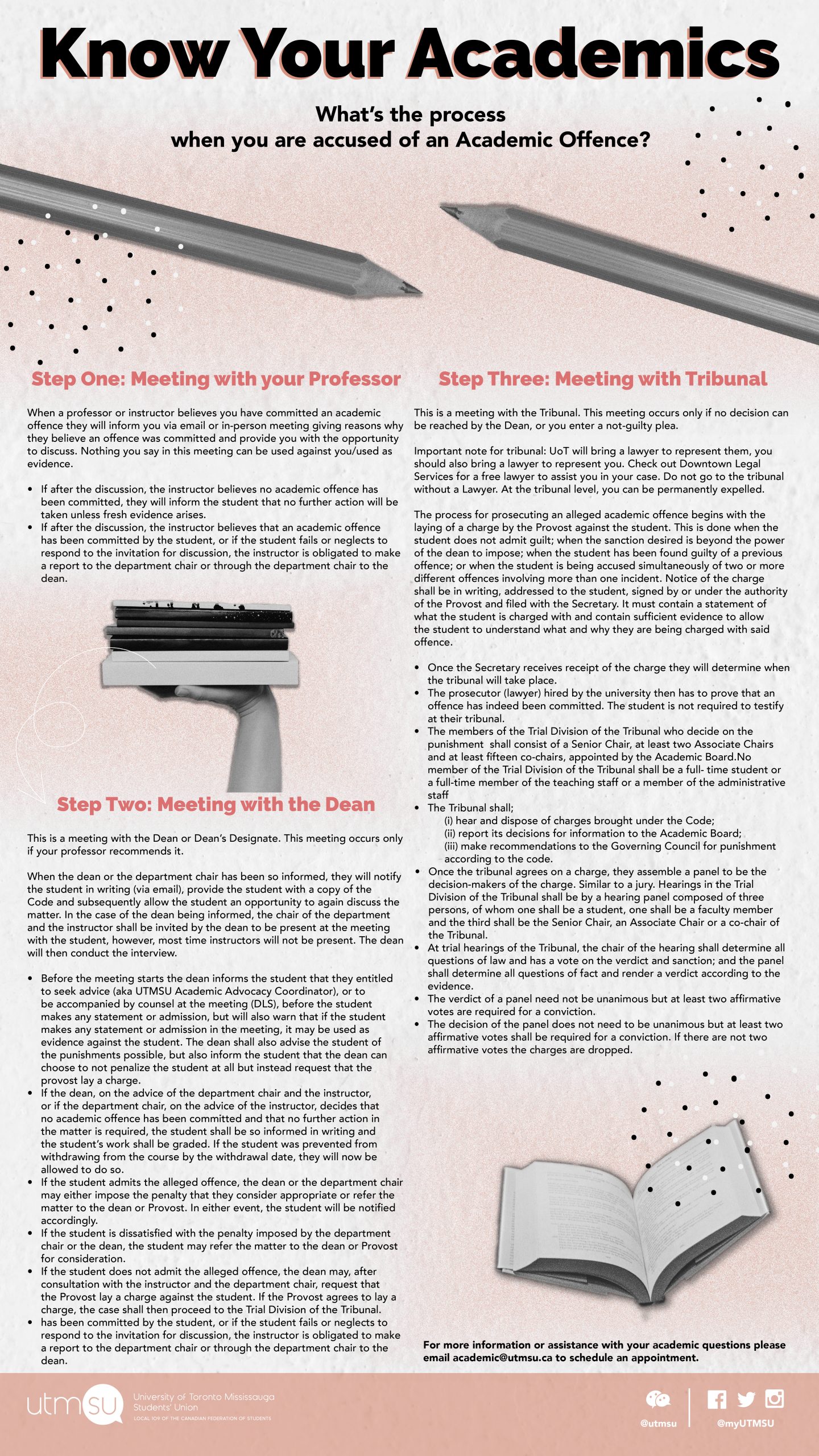 What is Credit/No Credit? How is it used?

What is Credit/No Credit?

Why use Credit/No Credit?

When can I use Credit/No Credit?

Warning: Some programs specify that courses with a grade of CR/NCR will not count as part of the 4.0 credits required for program entry. Program entry requirements are detailed in departmental listings in this calendar. 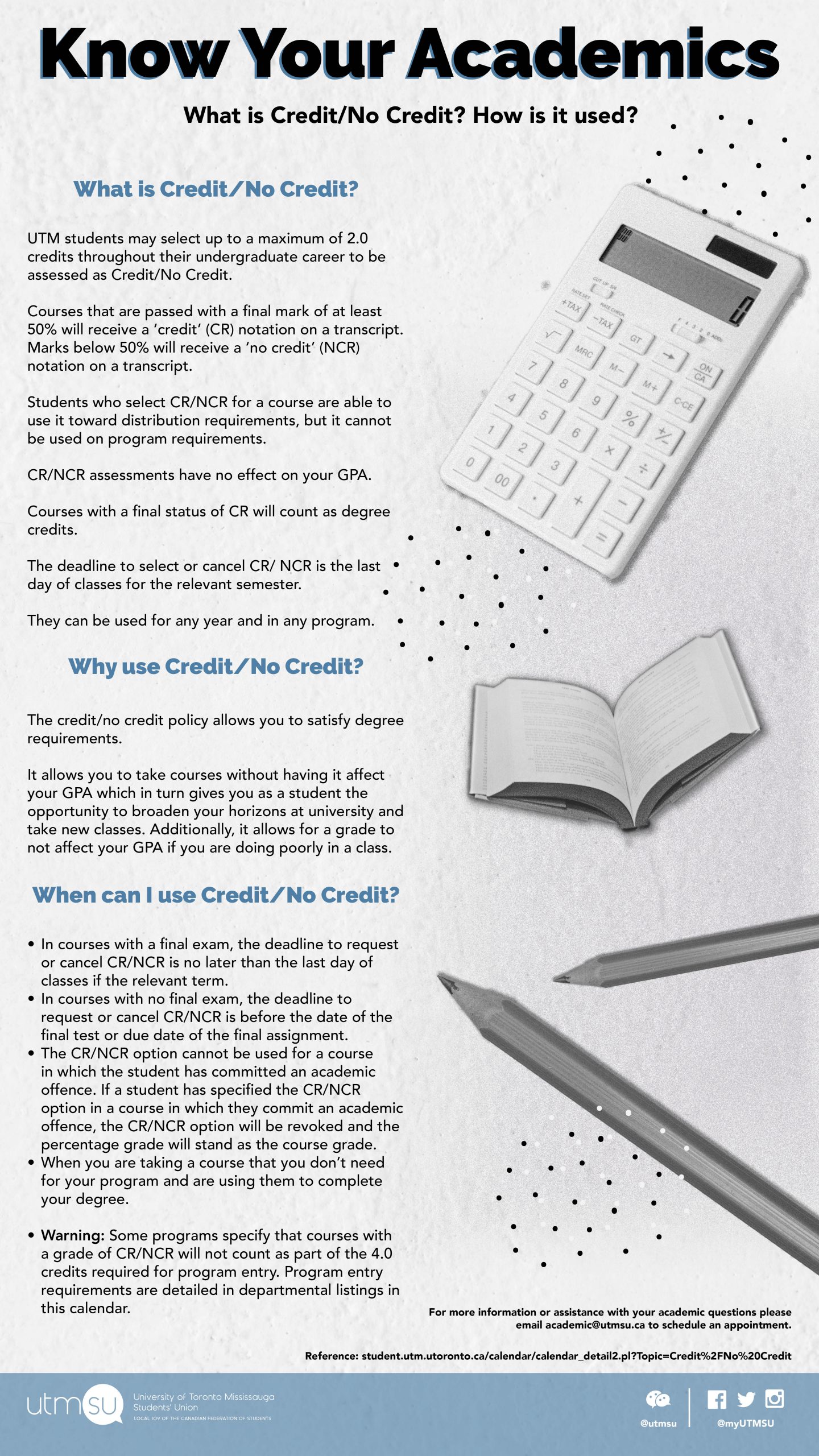